Where did God go? 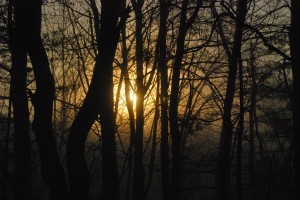 The early morning air kissed my face as I stepped out onto our deck. My sleepy eyes struggled to focus on the world beyond my doorstep. Taken back, I was surprised by the dense fog that had seemingly consumed my neighborhood while I slept.  Other than a few trees in the woods directly behind our house, the world had unknowingly disappeared. Amazed by the incredible denseness of the fog my eyes strained, without success, to find evidence that our neighbor’s house still adorned the property adjacent to ours.  Despite the lack of evidence, I had no doubt that beyond the thick blanket that covered our community, the family next door remained.  I knew that with the rising sun, it would only be a mater of time until the fog would burn off and my neighborhood would be visible once again.

Standing there in that moment, I thought how often I’ve felt that way in life. Problems and challenges roll in like a dense fog.  In those difficult times, it feels like the known and trusted disappear with our shortened vision. God seems distant, or all together absent. It’s easy to stand amidst our struggles and question where He’s gone or wonder why we can’t hear, feel, or see Him. But, just as I could rest assured that my neighbor’s house remained next door despite seeing no physical evidence to prove it true, God is still very present when life’s fog consumes our world.

We can find reassurance in scripture reminding us of His promises:

Be strong and of good courage, do not fear nor be afraid of them; for the Lord your God, He is the One who goes with you. He will not leave you nor forsake you. Deuteronomy 31:6.

When challenges of life become a dense blanket that surrounds and attempts to consume you, He is still with you! Draw close to His son enabling the fog in your life to yield to His presence. Rest confidently knowing He will never leave you and never forsake you.

What do you do to remember He is near when you can’t see or feel His presence?