What to do when you’re off track: Real wisdom from a reality tow truck TV show 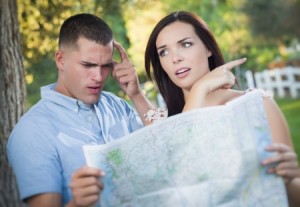 “What are you watching?” I asked my husband as I passed through the living room the other day.

On the TV several men were intensely engaged in planning a rescue of an 18 wheeler that was precariously perched on the side of a deep ditch. Two tow truck operators worked with a small crew carefully placing hitches with cables to the wayward rig hoping to get the truck back up on the road without further damage or loss.

“Stay right there,” the leader said to one of the workers. “Listen and watch the back wall,” he instructed, worried that the load could shift and rupture the side of the truck as they began to pull.

Fighting the fading daylight, the crew knew time was precious. Their rescue effort would only grow harder if night settled in. The truck moaned loudly as the cables drew tight. Steadily the cranks grew tighter inching the truck towards the road. The one worker watch and listened closely from behind the truck while the other workers pulled it closer to safety. As the weight shifted, the truck let out a few ominous sounding creaks and thuds before it came to stop upright at the side of the road, right where they wanted it.

I have to admit, while it wasn’t a show I probably would have picked, I found some great wisdom in that rescue. In life, we make missteps that take us off course. We get distracted. We make mistakes. Maybe we’ve even started and stopped our progress so many times that we wonder if we’re doomed to live life off track.

In the show my husband was watching, we’d never expect the trucker to give up and leave his truck in the ditch. His truck, his load, and his job are all too valuable. In life, we are too valuable. You and I both are too valuable to let ourselves wonder off course and not get back on track.

So what do we do? I thought I’d share  a few nuggets of wisdom from the unlikely place of the tow truck reality show:

Recognize you’re off track – I know, it sounds obvious, but the very first thing the trucker did was to stop. He knew he could not continue forward progress where he was, off in the ditch. If we’re off course, the first thing we need to do is stop! We need to recognize it. And, we need to refuse to continue in the wrong direction.  The Lord makes firm the steps of the one who delights in him; though he may stumble, he will not fall, for the Lord upholds him with his hand. Psalm 37:23-26

Accept help – Just like the truck driver couldn’t get back on track on his own, sometimes we need help too. And, that’s ok! Our help may come from a supportive friend, a spouse, someone in our church, or a maybe counselor or support group. Two are better than one, because they have a good return for their labor: If either of them falls down, one can help the other up. Ecclesiastes 4:9-10a

It’s a process – focus on the small steps –  Just like it took the tow crew time for each step before the truck could carefully be pulled from the ditch without further damage, we need to recognize getting back on track is a process for us as well. Don’t let yourself become overwhelmed by the length of the journey or how many steps you need to take. Instead remember progress can be made focusing on one step at a time. But as for you, be strong and do not give up, for your work will be rewarded.” 2 Chronicles 15:7

Be accountable – One of the tow crew’s jobs was to watch and listen as the truck moaned and shifted into place. His job was to monitor the progress and to shout and alert the team if something wasn’t right. The ultimate purpose of his job was to ensure progress was made without further damage or setbacks. When we’re trying to get back on track, we need someone like that on our “crew” someone who will watch and listen, and even shout if we’re not going in the right direction. By them holding us accountable, we’ll get back on track and avoid further damage.

My husband laughed when I told him that show would be the inspiration for this week’s blog. You know, I never did figure out the name of the show he was watching, but I’m thankful for the valuable reminders it gave me.

What do you do when you find yourself off track? What helps you get back on track and stay motivated? I’d love to hear from you! Have a great week!