The Real Reason We Procrastinate and What To Do About It 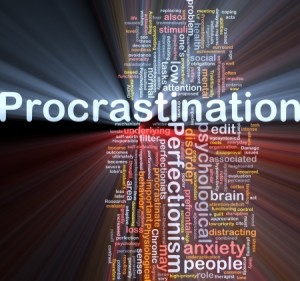 Recently I revisited my goals for the year. On one hand I have a few goals that have experienced great traction over the past few months. But I have to admit, there are a few others that…well let’s just say they have more opportunity for future growth. Sadly procrastination has definitely claimed the progress on those goals.

Talking to a few friends recently, I realized I’m not alone when it comes to putting off until tomorrow what could be done today. The conversations have helped me realize that when we understand why we’re procrastinating, it’s far easier to be empowered to begin moving forward.

The great news is, we can choose to change and can win the battle against procrastination!

How to stop procrastinating:

Once you realize why you’re procrastinating, it’s easier to address the roadblock and get the task done. I’ve recently caught myself putting off something that wasn’t a fun project. By procrastinating I realized I made it last twice as long as it needed to. Next time I catch myself doing that, I’ll push to get it done and move on sooner!

Do you ever catch yourself procrastinating too? What’s your biggest cause and how do you move forward? I’d love to hear from you.