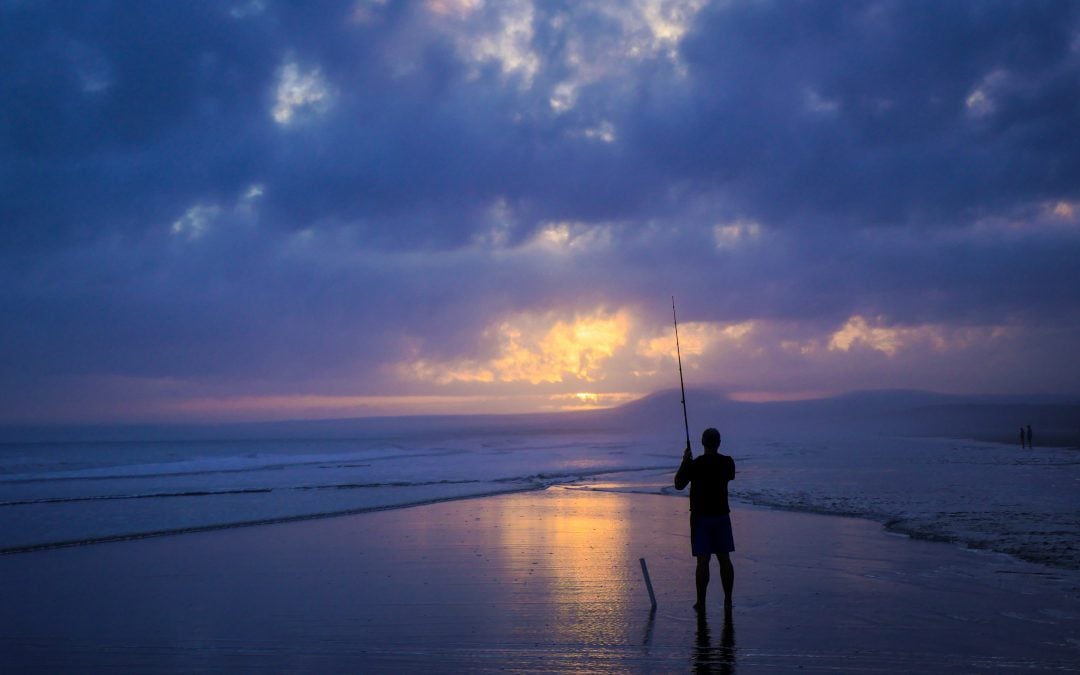 It was an unexpected encounter on an atypical morning. Determined to find the silver lining on a short beach getaway, I sat down on a bench along the water despite the grey skies and chilly temperature. I was just looking to make the most of the dreary morning and definitely wasn’t expecting a lesson in tenacity. I quietly listened to the waves lap against the rocks and the sea gulls seeming to laugh with their cry.

Not long after I sat down, a fisherman made his way out onto the rocks not far away. He settled into a spot and began fishing. It didn’t seem to bother him that the clouds covered the sky and a cool wind kept the nearby beach mostly empty. As I watched his efforts, I was amazed by the simple reminders in tenacity that he spoke without ever saying a word.

5 Things you need to know about tenacity:

If the fisherman had simply shown up at the edge of the water with his gear, he wouldn’t have caught anything. It wasn’t enough for him to get up early, to pull together all of the things he needed and not actually cast his line. How often do we stop our efforts short when one adjustment could completely change our results? It’s not enough to just show up in life, we have to actually cast our line, take the next step, and put in effort if we hope for change, growth or a harvest in any area of life.

2. You have to keep casting.

The fisherman was persistent. He continued to cast his line over and over again. He didn’t give up after the fifth or tenth try, nor did he throw his hands up and say “it’s no use, I’ll never catch anything.” He kept casting. How many times do we try something a few times and give up when we don’t see our effort yield as quickly as we’d like? Don’t give up. Keep casting. Tenacity is your friend.

3. Bigger fish are in deeper waters.

While the fisherman stood on the shoreline casting, in the distance other fishermen headed out to sea on their boats. While both may catch fish, the bigger fish are in the deeper waters. Sometimes in life we’re called to be shore fishermen. Other times, we’re called to take the risk, take a chance, and head to deeper waters. When God nudges you out to the deep, refuse to be satisfied standing at the shore. Follow his lead.

4. Some days you won’t catch anything.

There will be days that you don’t see the “harvest” for your efforts. It’s ok! Some days are more about the discipline, the routine, the habits and choices. A fisherman doesn’t stop fishing because one day doesn’t yield what he thought it might. Determined, he gets up and keeps going. The effort he spends teaches him more about his craft. Be willing to learn from the plentiful days as well as the unfruitful days. Reinforce your good habits and continue to develop the discipline you desire. Eventually the results will follow.

5. Persist despite the conditions.

Hardy fishermen brave ocean swells and rough weather with determination and tenacity. Wind and rain does not push them to retreat because their survival depends upon it. In life, we need that tenacity to remain focused when we’re pushed or distracted by storms. Pursue your purpose. Define and take steps towards your goals. Let challenges push you forward rather than allowing them to stop you in your tracks. Persist in spite of the storms!

I’m thankful for the simple reminders I brought back from my time sitting near the water. I never met the fisherman or exchanged any words yet the wisdom was profound. I hope his efforts encourage you right where you are today. Which of these reminders did you most need to hear? Comment and join the conversation, I’d love to hear from you.

If this post encouraged you, why not share it and encourage your friends too? And, if you haven’t yet signed up to join my email list, why not take a moment to do that so that you don’t miss a dose of encouragement.