Have you ever felt like you’re the only one with a messy life? 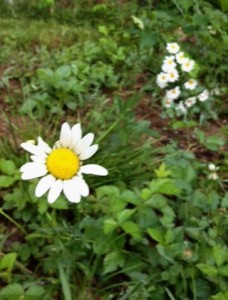 The other day while I was out with my dog Hailey, I came upon one daisy standing alone, worn and broken. Just beyond the lone daisy I spotted a bunch of daisies reflecting the morning light with their bright white petals. It appeared to be such a perfect bunch of flowers, a stark contrast to the one. I felt a twinge of sadness for the daisy that stood before me. Clearly life for the small flower had been less than perfect. Its petals torn and broken.

Yet, just feet away, the batch of daisies appeared so perfect. The imagery the scene provided brought back memories of feeling just how that daisy appeared – feelings as though I was the only one that ever felt worn, the only one who didn’t have it all together, or the only one whose life didn’t quite go as planned. In life, it’s all too easy to look at family, friends, coworkers, or neighbors and think they have it so easy. If only our lives could be more like theirs.

My train of thought broke for a moment as I decided I wanted a picture of the cute beautiful bunch of daisies; no doubt it would be a great picture. Stepping closer to the bunch, I snapped a quick photo. As my eyes focused, I was surprised by what I saw. 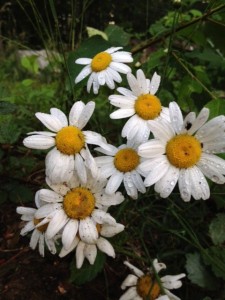 The group of daisies that appeared so pristine from a distant was also tattered, worn, and broken.

I smiled. How like life is that? We fee like we’re the only ones who have been beaten down by our life’s journey. We often feel as though we’re the only ones whose life is less than perfect. But, when we get close enough to those around us, we see that they too have struggled. They too have been broken. And just like us, they aren’t perfect despite appearances from afar.

When you find yourself struggling and feel broken rest assured, you are not alone. Although everyone’s challenges are different, we have all been worn by life at some point in our journey – it just isn’t always visible from afar. When you feel like that daisy, there are a few things you can do…

3 Things to do when you feel worn by life:

1. Find reassurance in scripture. Memorize or write down these two verses and remind yourself as often as needed:

The Lord is close to the brokenhearted and saves those who are crushed in spirit. Psalm 34:18

He heals the brokenhearted and binds up their wounds. Psalms 147:3

2. Pray. Pray through the difficult times.

Rejoice in hope, be patient in tribulation, be constant in prayer. Romans 12:12

3. Pay it forward. Find a way to help someone else. Maybe it’s taking a meal to someone recovering from an illness, or mowing the lawn for an elderly neighbor, get creative and do something! It’s a win-win. You’ll feel better and help them in the process.

When you feel like the lone daisy, remember the picture of the bunch of daisies. Then smile and remember, you are not alone!