“Guilt” by Association, An Unlikely Lesson in Grace. 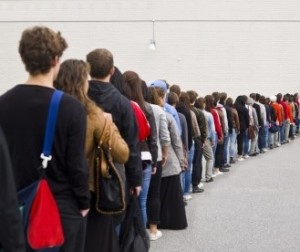 We’re never going to get in, I thought as we joined the end of the extremely long line. In front of us blocks and blocks of people who apparently got in line long before us. It was supposed to be a day that could quench a little bit of my homesickness. I had been away from home for nearly a year, living outside of Stockholm as an exchange student. On that early summer day, my Swedish host dad Håkan and I headed into the city for a rare visit to Sweden by several US Naval ships. For just a few hours that Saturday, one of the ships was open for group tours. But apparently there was an overabundance of curiosity to see the ships that day. For me, it was more personal. My dad served on a Navy destroyer years earlier. I hoped the tour might make me feel just a bit closer to home.

Håkan craned his neck to survey the line in front of us. With little time left before the tours would stop, we knew it didn’t look good. “I’ll be right back,” he said as he stepped out of line and began briskly walking towards the front. Soon he disappeared in the mass of people several blocks away. Alone at the back of the line, I waited.

Shortly he returned. “Follow me,” he said. Not having any idea what had transpired, I stepped out of line. Together we walked to the front. A group of a dozen or so people from the beginning of the line followed two sailors on board. Once they did, two sailors greeted Håkan and me. They motioned for us to follow and we did.

Soon aboard the ship, we were given a private tour that included portions of the ship not on the standard tours they were giving.  We met several other sailors, all who greeted us warmly. I couldn’t help but wonder what Håkan had told them. It wasn’t until we finished the tour and were on our way home that I asked.

“What did you tell them?”

While the sailors didn’t know me and they didn’t know my dad, we shared a common bond. For my time aboard their ship, they were family.

When I think back to that day many years ago, I still smile. Today it brings a smile to my spirit too because I feel like it’s a small glimpse into what it will be like to step into heaven one day. I was only able to see the ship that day because of who my father was. Nothing I did could have secured my admittance. I had an advocate who spoke up on my behalf, who made it possible. Then, because of my father, I was warmly welcomed.

I am so thankful that one day I’ll be welcomed through the pearly gates because of who my Father is. I’m grateful that I have more than an advocate who will speak up on my behalf, I have a savior. And, unlike the brief reminder of home when I was in a foreign land, I will be home forever more.

Isn’t it great how God uses our everyday life to remind us of who He is? Encouraged by my story, I’d love to hear from you!